When we started unschooling our children, the biggest fears I had were around ‘reading’ and ‘maths’. How would they learn?!

This is not a blueprint. This is the story of my three children learning to read. I have seen unschoolers write online about much later literacy in children and also of children suddenly learning to read completely independently. That is not our story, and that’s ok. I hope our experience adds to the dialogue to show the myriad ways children can learn to read and write. And, as you will see, the way this has developed in each of my children has been quite different. My eldest two started reading at around five or six, and my youngest daughter has just started expressing an interest in some early literacy skills. She is three.

This is what it has looked like in our home.

I am going to start with my three year old because I feel like my eldest two have taught me so much about the process and it feels so liberating this time to sit back and watch it unfold without those fears I held initially.

A couple of weeks ago, I was sitting in my daughter’s bedroom reading some books with her. One of my sons came in and picked a book off her shelf and said, ‘I want to read this one to you.’ So, we sat and listened and my daughter said ‘he knows how the story goes too!’

‘Yes, he is looking at the letters and the words.’

‘I want to do the letters too!’

‘Would you like me to show you some letters?’

Showing her some letters is probably a bit misleading. She has been surrounded by these squiggles since birth. This was our first foray into looking at assigning meaning to those lines.

When we headed down the homeschooling path, I thought our learning would happen in a much more traditional way, so I armed myself with all the resources I thought I would need. We quickly transitioned into unschooling and many of these ‘reading resources’ have been sitting in a cupboard collecting dust. The journey to reading looked different for my eldest two and there wasn’t a need to use them.

However, these tactile resources are really interesting for my daughter. She is enjoying tracing the sandpaper Montessori letters with her finger, drawing the letters in flour and carrying around the wooden letters that are important to her. Right now, she is only interested in the letters at the beginning of the names of the people she cares about, and also snakes and oranges. This has managed to cover a surprising amount of the alphabet!

Many years ago, I made letter boxes full of little toys beginning with each letter that we had lying around. She is really enjoying finding more toys and adding them to the boxes. 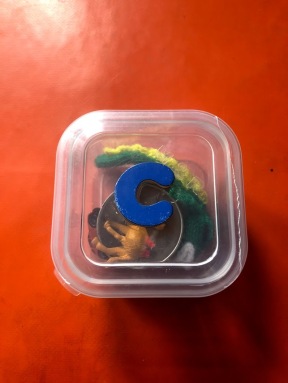 She just came and sat on my lap and is now trying to find her letter on the computer. Suddenly she is seeing the world of letters around her with new eyes and it is exciting! 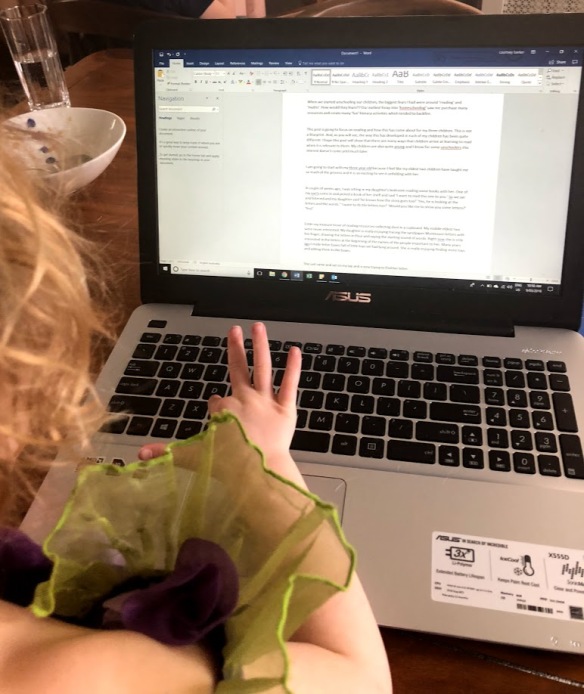 Since that first spark of interest, she has asked me to ‘do letters’ each day. Sometimes she writes one letter in flour and then quickly descends into drawing other things and spreading the flour far and wide. Other days she spends half an hour matching little toys to boxes and asking questions. And books. There are always lots and lots of books. I also think she is excited about the new letter activities I keep managing to unearth from deep in the cupboard that she hasn’t seen before. New toys!

There are a couple of observations I have here that I think are really important to this story. Firstly, she is the only one of my three children to express a direct interest in learning early literacy skills. She is also the earliest of my three. Secondly, this is ALL on her terms. I am not strewing activities, I am not prompting her or pushing her past her genuine interest.

But most importantly, and maybe a surprise to those of you who are new to unschooling, I am expecting this to stop in a couple of weeks. This is something I have noticed with all of my children. There is a flurry of activity, an obsession, a desire to know more, more, more. And then seemingly overnight it stops dead in its tracks. I have come to think of this dormant period as the most important in the learning process. This is where everything begins to happen in the background. It is the time that all the knowledge they have acquired begins to be quietly linked together.

It is also the hardest period as a parent who has come to know ‘education’ as a very linear and consistent path. Fight the urge to push the process forward!

In the meantime, I am almost certain that she will continue on this track for a while longer, learning the sounds that letters are making, pointing out ‘her letter’ wherever she finds it, lighting up over words with sounds she now recognises, and then there will be silence, contemplation. At some point down the track, it may be weeks, it may be months, it may be a year or more, she will surprise me one day by reading a word. She will start asking questions like her brothers did about why ‘shark’ starts with an ‘s’ when the sound is ‘sh.’ And she will start sounding out the words that are relevant to her. And the excitement will ignite again.

Or perhaps she will follow a different pattern and path altogether. Time will tell.

So what about the others?

My second son could see his brother reading alone and he asked me to ‘teach’ him to read. He had just turned five. I didn’t really know where to start on the formal teaching process, and we were starting from the beginning, so I ordered the book ‘teach your child to read in 100 lessons’ which is as boring as it sounds, but it really appealed to him. He had the same flurry of enthusiasm, wanting to do five or more ‘lessons’ in a row sometimes for a couple of weeks. We got just over half way through the book and he lost interest. He was sounding out basic words in that clunky way children do when they are learning and then decided he knew enough for the moment.

For the next few months or so he really didn’t show any outward interest in reading. He would occasionally read signs and we continued to read to him every night before bed and during the day if he brought a book to us.

One night, out of the blue, he told me he wanted to read me the WHOLE book. It was 54 short pages, and about 10:30 at night. I agreed but was mentally strapping myself in for a loooong night of sounding out words which I assumed he was still doing. But away he went reading at least 80% of the words by sight. I don’t know what happened in those quiet months, but it was really important. And the same enthusiasm ramped up again. He wanted to read anything and everything. He wanted to read to his grandparents on Skype, he wanted to bring me bigger and bigger books and read every page.

And then it stopped again. We didn’t push. There was no, ‘can you read to me’ or ‘you used to love reading, you have to practise!’

A few months later, the writing came. This time, his motivation was to communicate with his friends on Minecraft. There were a few days where he spent a lot of his time on the computer asking me how to spell many, many different words. I always started with ‘what do you have so far’ and he realised more and more that he didn’t really need my help.

So now we have a six year old who can read and write. I am constantly amazed by the words he writes and types correctly. There is no ‘practising exceptions to rules’ or ‘spelling lists’ or any other kind of teaching around spelling. The constant exposure he has to words around him seems to be enough. He reads with his Dad every night and sometimes he wants to read to his Dad and sometimes he wants his Dad to read to him.

My eldest son, who is eight now, was a bit different. He got the year of kindergarten in school and the full brunt of me trying to be the best homeschooling teacher I could be. As a result, he actively refused anything that resembled formal learning in the period after we took him out of school, so wasn’t interested in any of the shiny resources I had purchased. We continued to read to him each day and at some point over the next year he was reading fluently. I noticed when we played a board game one day and he wanted to read all of his game cards alone. In that quiet period of absorbing everything around him, it had clicked.

Being a bit scarred from me pushing him to read early on, he rejected reading alone for a long time. One day we were at the book store buying a book for me and he discovered the Minecraft section. We didn’t leave the store for a very, very long time and I realised that he is more drawn to books that build on his interests rather than fiction. He doesn’t read novels, but he reads to extend his knowledge in an area and still loves audio books or one of us reading to him at night. He also loves reading to his sister and helping his brother if instructions or the spelling of a word is too complicated for him. And he reads a lot online.

The common thread amongst my children learning to read has been exposure and space. They are in a home where they have access to books, access to computers and tablets, access to games and art materials and other resources, and access to adults and siblings who want to answer their questions and help them in the way they ask to be helped. They have space and time to process this information and progress to the next stage when it feels right for them.

I would love to hear your stories of children learning to read on their own terms, and in particular it would be great to have some stories in the comments about later readers.

3 thoughts on “How My Unschoolers Learnt To Read”