In an effort to show how child-led learning happens in our home, I document what we do every second Tuesday for those that want to follow along. I hope this takes the bias out of blogging about the ‘better’ days and can show a real picture. This is the second instalment.

Our day started a little bit later than usual today. We had a couple of really late nights on the weekend and we are all still catching up. My six year old woke around 8:00am. He really wanted to go and wake his brother because he wanted someone to play with. We talked about how he would have more fun with him if he was well rested, but he wasn’t convinced. This wasn’t a conversation that lasted long because as he turned to charge upstairs, his brother appeared, sleepy eyed and ready to play.

They sat down to play Minecraft. My husband was already up getting ready for work and had organised breakfast for everyone which they ate when they were ready.

About half an hour later, my daughter appeared, naked and determined to paint. I was just waking up myself and felt the urge to say no. I took a breath, realised there was no reason to say no, and went to set up the paint. 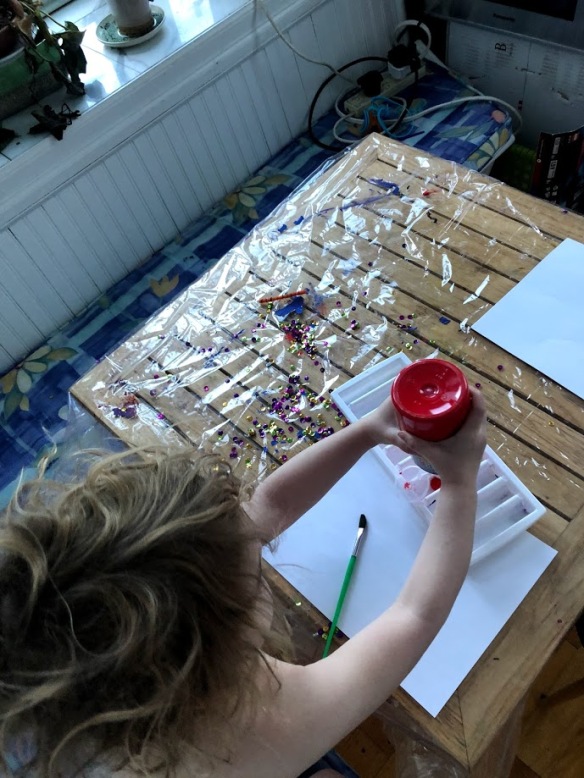 She happily painted while I made a coffee and regrouped.

I reminded the kids that we had agreed to go to Reptilia, a reptile centre this afternoon with friends. My eldest son decided he had had enough of Minecraft and went upstairs to build R3PTAR, the snake looking mindstorm lego robot. He found the instructions on his tablet and started building. For any kids out there who are interested in programming and lego, this is a really great set.

My daughter had finished painting and she wanted a bath. This worked out well because I also wanted to have a shower so we went and got ready for the day together.

Afterwards, she spent some time building with magnatiles and then declared that she was still too tired and wanted to go back to bed. This is code for ‘I want to read books’ so we went into her bedroom and read a few books together.

Her six year old brother had also finished with Minecraft. He came upstairs and wanted to read. He is keen to practise at the moment so he can read faster in the games he likes. He chose an Elephant and Piggy book. He chooses these because he likes that he can read them easily and has a huge sense of pride in recognising all of the words and reading ‘quickly like mum.’

My daughter got bored of reading and wanted to watch Wild Krats. I put it on for her while her brother and I read.

My eldest son was still busy with lego so I went to see what he was up to and found the pieces for a few steps while he built.

After a couple of steps, he would get up to ‘practise his ninja moves’ and then sit back down to continue building. I find this so fascinating. His body likes to move and moving helps him to refocus. I’m so happy he has the freedom to learn in this way without being told to sit still.

My daughter lost interest in Wild Krats and went to her playroom to play. I used this opportunity to get a few things ready for the outing. 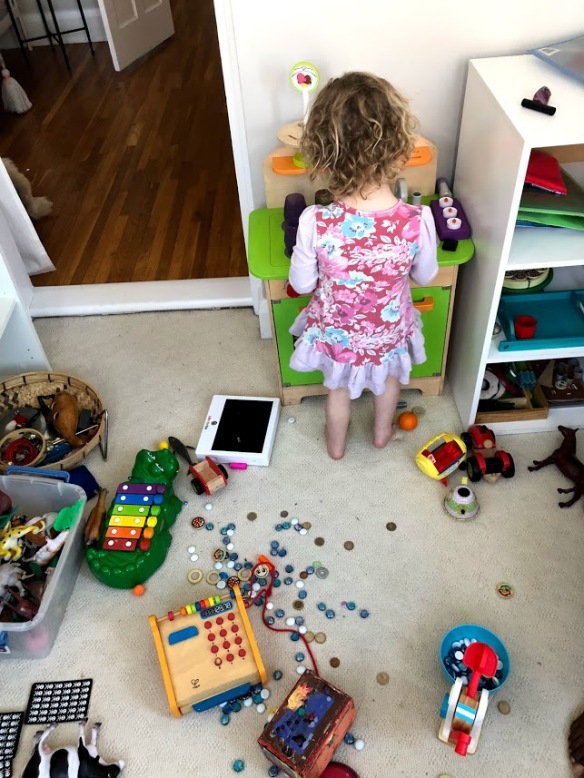 Not long after, my eight year old came downstairs. He realised he didn’t have time to finish the snake robot before we had to go and wanted to do something else. He put on the transformers cartoon and half watched while playing with a few of his favourite transformers. 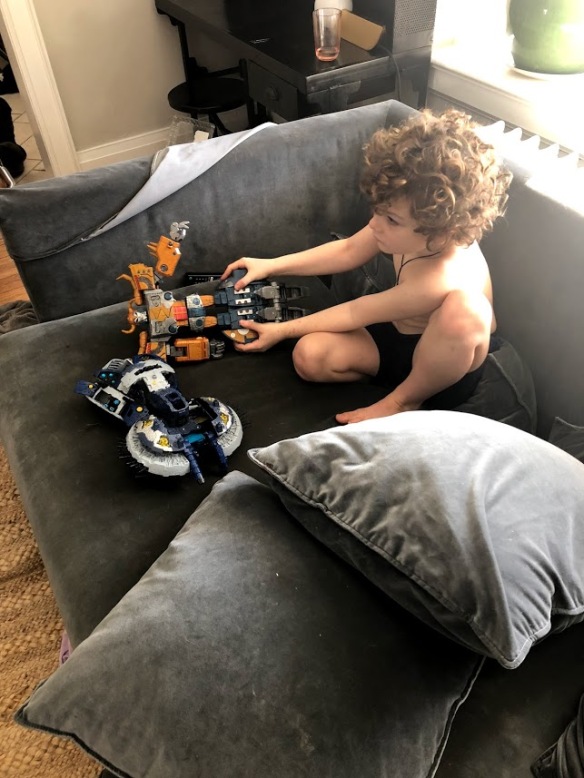 My six year old was back at the computer and playing Roblox and Minecraft again. He is quite absorbed in this at the moment and spending a lot of time finding new mods to download and try, and watching youtubers to figure out how to do stuff. We don’t limit screens, which I know makes some people uncomfortable. It makes me sad to think that he would miss out on engaging with this passion on the deep level he is if we limited the time he had to explore it.

It isn’t long until we have to go out so I get everyone’s clothes ready. There was a reasonable amount of snow last night and I predict that my eldest son and I are going to have different ideas about what he should wear so I have a chat with him about it. It is -9 outside. He wants to wear ‘shorts, a shirt with no sleeves and sandals.’ We talk about how last time he wore sandals when there was snow his feet got wet and cold and he got upset. He agrees to wear boots, but….I could write about this conversation for pages and pages. Suffice to say that respectful parenting requires a lot of empathy and patience sometimes!

This conversation took a lot longer than I expected and time had gotten away from me. I looked around the room at half dressed children who hadn’t yet had lunch and I felt the panic and frustration building. I left the room to get some perspective. I have three young kids and our timeline for leaving wasn’t going to work out. I am very understanding when my friends are running late and I knew our friends would be understanding too. I sent a message and felt the pressure ease.

I got everyone something to eat and finished helping with boots and clothes.

There were a few other set backs (my six year old decided he didn’t want to go, and then changed his mind. I got outside ready to pack everyone in the car are realised that the car was covered in snow) but we eventually got going.

I always start getting everyone ready a long time before we leave to try and make the process as calm as possible, but lately it has still felt stressful getting out the door.

Another thing we are getting used to in Toronto, is that everywhere takes a long time to get to. We live in midtown, but getting anywhere else downtown takes time because of traffic, and getting to places outside of the city takes time because of distance. Nothing really feels close so you can usually bank on half an hour to an hour each way in the car.

We have been listening to a lot of audiobooks and I put The Magic Treehouse on today. But it didn’t cut it. My six year old was feeling frustrated and expressed this by bothering everyone in the car. Dealing with tears and anger while driving on an icy highway is incredibly stressful. I could feel myself losing my cool so at the first available opportunity, I pulled over so we could talk. I asked him to ask me some questions and we could chat to make the time go faster. He had calmed down and wanted me to ask him ‘maths questions.’ He loves me asking him sums to figure out. My other two are not as excited about numbers so they kept listening to the book. He likes me asking him multiplication with whole numbers or simple fractions right now. Numbers seem to make sense to him and he loves telling me to ‘make them harder!’

We made it in the end, but it was a stressful drive. When we arrived, my six year old burst in to tears and said ‘you hate me, don’t you.’ He was embarrassed about his behaviour. We spent a bit longer in the car reassuring him that fighting in the car while someone is driving is unsafe and we were scared when it was happening, but we love him and we are all looking forward to having a good time. 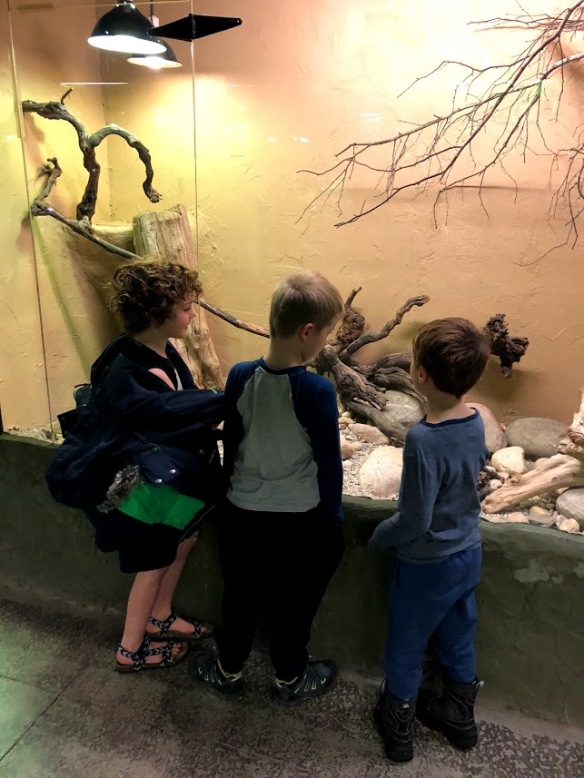 We met our friends inside and had a great couple of hours looking at the snakes and lizards. We got to touch a couple and watch some being fed. My daughter was scared of most of the reptiles, so she stayed very close and needed a lot of reassurance. The kids also had a lot of fun on the little playground. It was hot inside and they all took their shirts off. I find myself feeling the stares and judgment when things like this happen, even though there is no logical reason why not having a shirt on should be a problem. I was relieved that we were the only ones there so it didn’t bother me today.

After a couple of hours, the boys were ready to leave. I can feel myself getting sick so I was ready to head home too. Unfortunately, the exit is through the gift shop.

My eldest son has wanted a snake as a pet for about eighteen months. There are a lot of reasons, including the fact that they can live for forty years, why we have resisted this. He has some money saved and started to get excited about making a reptile purchase. I kept reminding him that we wouldn’t be making any purchases today, but he was free to ask as many questions as he liked so we would have the information we needed to make a decision. He got busy asking the attendants lots of questions, and once he realised he didn’t have enough money, he got very upset. These situations can be really tough. I empathised, I diffused his anger that I wouldn’t contribute funds and tried to stop my other two, who by now were also on the purchase hunt, from causing too much havoc. It was a slow process and a lot of tears, but twenty minutes later we were in the car on the way home, without a snake.

I was tired and feeling a little overwhelmed and could feel a cup of tea calling my name. We got home late, at around 4:30 and I put the kettle on. The boys ran upstairs to play ninjas in our ‘parkour room’ and my daughter decided she wanted pancakes. The tea would have to wait. I quickly made some pancakes with her and got to my cup of tea which I had to shield protectively from wayward fists and feet as the ninja game moved through the house.

After a while, my phone rang. It was one of the boys’ friends who wanted to play Roblox. They played for a little while but then decided they wanted to play Minecraft. They facetimed with their best friend from Chile and played ‘bed wars’. It sounded like a lot of fun.

Around 6:30 my husband got home. The boys were so excited. They had organised to go on a ‘date’ tonight. They said their goodbyes to their friends and ran and got their outside clothes on. My husband and I got in a quick hello before they headed to a cheesy little café close to our house that sells chicken and chips. He sent me this photo of them studying the menu trying to decide what to choose. 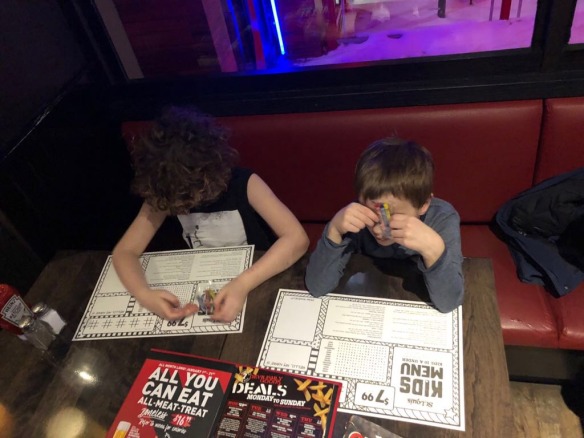 My daughter decided to stay home with me and we feasted on scrambled eggs on toast while enjoying the theatrical wonders of Peppa Pig. I tried not to fall asleep.

I was roused by my daughter declaring she needed to ‘play with water.’ This time, I definitely didn’t have the energy, so I suggested she have another bath and tip the water in there.

There was a flurry of excitement as the boys arrived home. My six year old settled in to watch some TV with his sister, and my eldest has come upstairs and is reading a book on our bed while I type this out. I predict I will fall asleep with the kids tonight.

And that’s it, another big day of child led learning.